The revolutionary potential of the prisoner class 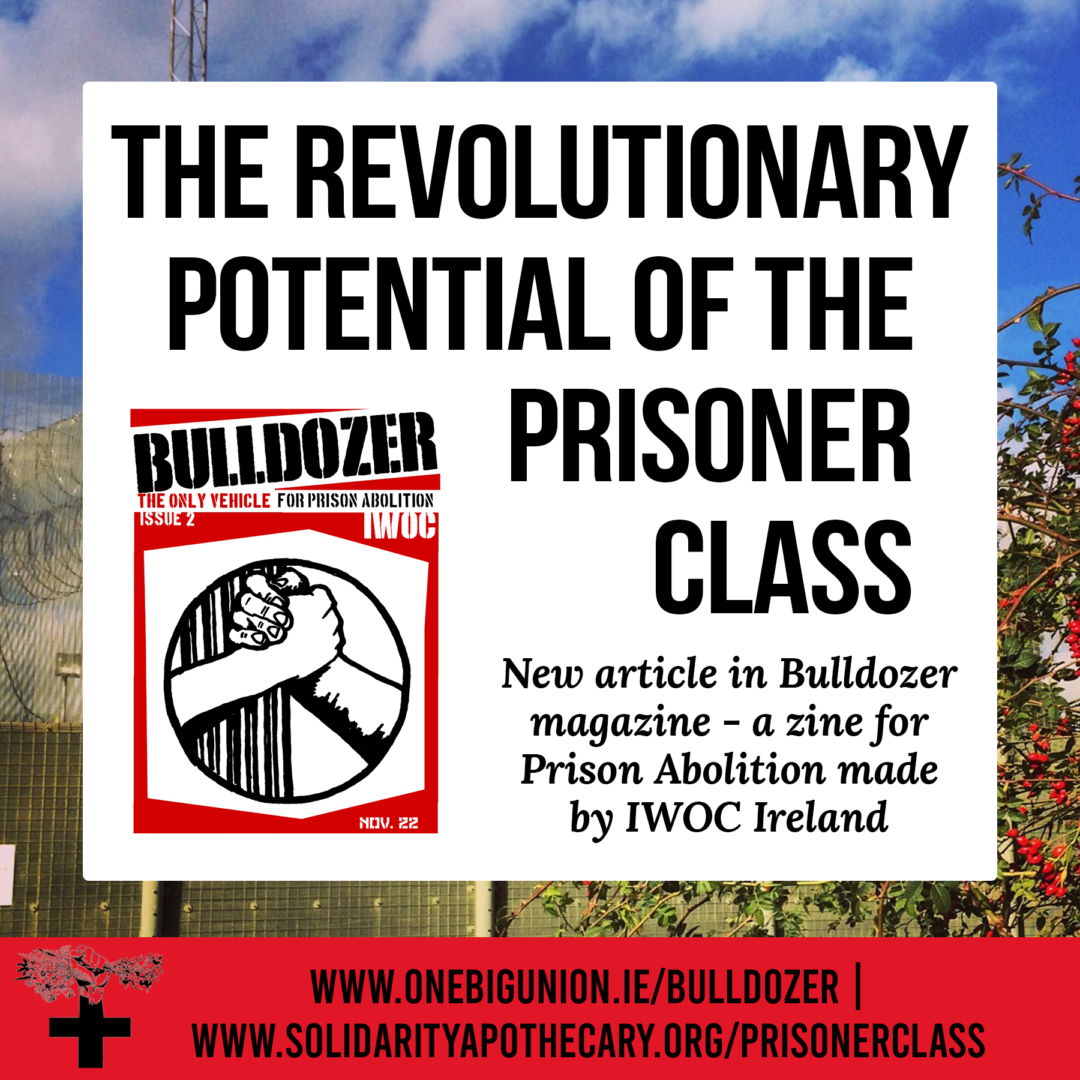 New article in Bulldozer magazine! Bulldozer is a zine for prison abolition produced by members of the Industrial Workers of the World’s (IWW) Incarcerated Workers Organising Committee (IWOC) Ireland. Download your copy of the zine here: https://www.onebigunion.ie/bulldozer

I’ve also recorded the article as a podcast episode that you can listen to here: https://solidarityapothecary.org/podcast/

The revolutionary power of the prisoner class is not a new concept, George Jackson wrote:

“The sheer numbers of the prisoner class and the terms of their existence make them a mighty reservoir of revolutionary potential. Working alone and from within a steel-enclosed society, there is very little that people like myself can do to awake the restrained potential revolutionary outside the walls. That is part of the task of the ‘Prison Movement’.i

A close friend of mine in prison and I were chatting once about probation officers, solicitors, social workers, offender managers, prison officers, police and even middle-class comrades who feel like social workers, like we are projects, or people to fix or save. We talked about the injustice of everything and how most reforms are just not gonna make a fucking difference at all. Her words stayed with me; she said: “It’s all got to go, we have to start again.”

The local revolutionary potential of the prisoner class

When you are in prison, when you are seeing the extent of state violence, the ease at which it is inflicted and the brutal obviousness of how it is classed, racialised and gendered: you have no hope for Jeremy Corbyn, or liberal ideas of reform. There is no trust or investment in politicians. No hope for participating in some kind of ‘civil society’. All the energy it takes to radicalise people, to make them see that this system is rotten to the core isn’t needed. People who have been in prison know. They know with their bodies, their families, their lives. It is because of this lived experience of oppression that the prisoner class has revolutionary potential.

Prison takes everything from you, so you feel like you have nothing to lose anymore. For prisoners who are doing serious time or for those who have families (which is a lot of them), they may ‘self-regulate’ their behaviour or limit their organising because things like parole are weaponised against them. But compared to people without a history of imprisonment, you’re already fucked and excluded from the workplace, you’ve already had your kids taken off you, you’ve got no chance at a ‘career’ or even access to many higher education programs. You’re already facing huge stigma from society and will have a ‘bad character’ reference anytime you end up in the dock again. I’ve tried so hard to build my life up since prison but self-employment has been the only option, and of course, it is precarious, low-paid, without a pension and completely resting on your ability to work and your physical and mental health (which prison also destroys).

So compared to privileged populations who are often pacified by the comforts and luxuries of capitalism, the prisoner class by default may lean towards resistance and rebellion. We’ve seen this with the Bristol riot in March 2021 and how many of the defendants having grown up in the care system, having been in prison before and living with a hatred of the police due to their life experience. How can we support people harmed by the prison system? For many of the Kill the Bill defendants who have been in prison before, they’ve never had political support in the same way – getting post from comrades all over the world, being supported financially, having their names shared worldwide as people who fought back against the police. What is the revolutionary potential if this comradeship is extended to people behind bars in general? Those whose lives have been destroyed by the ‘criminal justice system?

The global revolutionary power of the prisoner class

Prisons have always been a hotbed of struggle around the world – from the Kurdish freedom movement to the Black Panthers. Sakine Cansiz, a Kurdish revolutionary imprisoned in Turkey for many years wrote “Prisons are a battlefield”. They have been sites of organising, education, strikes and more for decades. We cannot forget that prisoners keep each other alive through collective care too – listening to each other, sharing resources, giving emotional support etc. These forms of resistance are often less visible than actions like hunger strikes, but they form a vital part of daily resistance to conditions that build power and solidarity. Separating prisoners into individual cells, as is the biggest pattern in new prisons, is a state strategy created to destroy prisoner organising and these more collective forms of life.

Prisons are also a major colonial tool – from the Gulags that enabled the colonisation of Siberia and the destruction and oppression of the many indigenous communities living there, to the penal colonies of the British, French and other colonial powers. This isn’t just past tense. Prisons continue to be a colonial tool. In settler colonies such as the so-called United States, Canada, Australia and others – First Nations and indigenous communities continue to be massively criminalised and make up large numbers of people in prison. This is no accident. This is how white supremacy and colonialism survive. Anti-colonial struggles are therefore interlinked to prison resistance, and so it is important to cultivate international solidarity amongst of oppressed peoples across the world.

Recognising prisons as weapons of state power makes them strategically important. IWOC organisers wrote “…prison is vitally connected to all the other apparatuses of domination. They depend upon prison, so for us, attacking the legitimacy of prison is a means to destroy the state, or at least erode it’s power. We are anarchists, bitter enemies of the state, and we focus on prison because we are looking for the weakest spots in our enemies’ armour.”ii

Starting with solidarity, building through action

Another IWOC quote that has stayed with me is “Rot doesn’t grow where the sun shines”. We need to shine a light on what is happening behind bars. Not just from think tanks and inspection reports – from the prisoners themselves. Action alerts can inform comrades about when a prisoner is being targeted and responses they generate do make a difference. It might be the difference between someone getting beaten by officers with absolute impunity and that person staying ‘safe’ because the prison knows people are watching them. It feels mundane to constantly create action alerts and graphics for Instagram asking people to contact prisons with complaints, but without it, they can continue to target and torture people. Through these action alerts, we can build relationships with more people in prison and we can keep building a movement that takes action for and with people inside.

Prisoners have been intellectual engines of movements for decades too. Sharing their writings beyond the prison walls is a revolutionary act. Likewise, supporting prisoner political education is incredibly important.

We never know when that revolutionary moment might happen, when riots and strikes sweep through prisons when there are mass breakouts and mass outrage enough to make the system buckle. But it’s not going to come out of nowhere. We cannot predict it or control it, but we can try to inspire it. We can be the match. We can work to create the infrastructure that can support prisoners directly, that can amplify prison uprisings and rebellious prisoners. We can rupture the ‘social license’ the prison system and the state have which means that whole populations believe prisons are natural, normal and necessary. Abolition is a verb (a doing word) – we can be proactive and take the offensive.

This infrastructure is not just about prisons themselves but about communities of care. This is the biggest thing I’ve learnt from Black and Brown feminists and abolitionists – from housing to harm reduction, to alternative mental health support to structures to challenge sexual violence and support survivors. I feel distracted by my rage sometimes, I just want to destroy the prison system right now, I forget that abolition is so much more as a revolutionary strategy. It involves everyone. Check out Brick by Brick: How to build a world without prison by Cradle Communityiii if you’re interested in this aspect of abolitionist work.

But why should we focus on supporting prisoners when there are so many other things to fight? Author Karlene Faith writes that “Prison is the place where all injustices converge”. Prisons are the main tool of the state to maintain a class-stratified society. It’s what stands between us and taking everything back from capitalists. Prisons keep people poor. They target racialised populations. They are an epicentre of violence against trans communities. The list is endless. Name any group of people experiencing oppression and you can guarantee they are a targeted part of the prisoner class. There are no ‘single issues’ when it comes to prison. All these forms of injustice are interconnected and as Faith says, they converge in prison.

We cannot forget either that this is a life and death struggle. England and Wales had at one point the highest rate of prisoner suicides in the world. The chance of dying from Covid-19 in prison was three times higher than the general population on the outside.iv

I know prisoner support work is hard. I know it can feel less sexy and adrenaline-filled than being on the streets, fighting fascists or sabotaging a fox hunt. But it is important revolutionary work. We cannot forget people behind bars. We need to prioritise building relationships with prisoners, supporting prisoner families, challenging prison expansion and resisting the whole prison system and its role in society. But prisoners cannot be excluded from these movements, they need to be the heartbeat.

ii See Organizing the Prisoner Class: An Interview with IWOC. Available at: https://itsgoingdown.org/organizing-prisoner-class-interview-iwoc/ 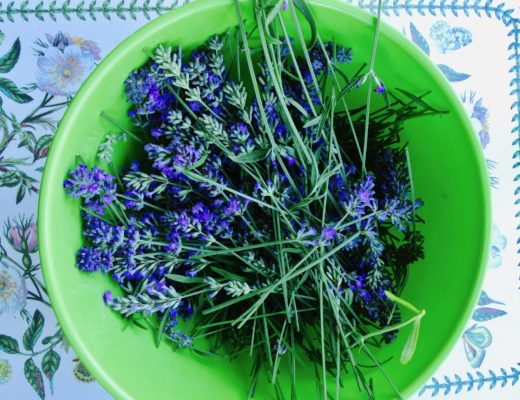 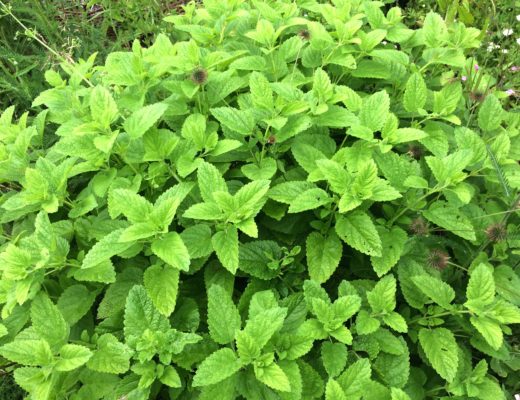 Becoming a herbalist. What do I fear? 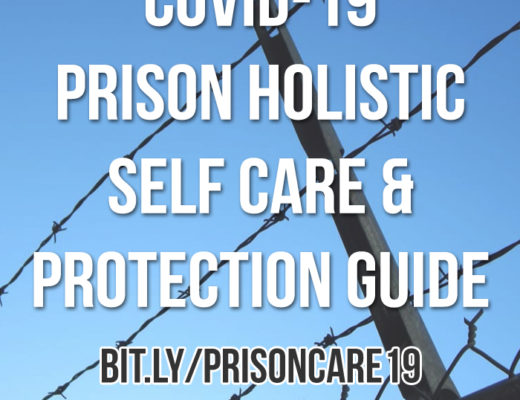